Minutes of a Meeting of Hanwoth Parish Council held by video link on 2020 at 7.30pm

2.   Cllrs John Timewell and John Toye:  were not present.

3.   Minutes of the Meeting held on 6th May:  were agreed and signed pp by the clerk.  Proposed GC, seconded CP.

a.     Michael Barclay had kindly offered to mow the churchyard.  The Parish Council will make a donation to the church in lieu of cost of mowing.

5.    Financial Report: the clerk reported a current credit balance of £2,000.  The Financial Regulations were adopted, proposed JS, seconded CP.  These would go on the website.

6.   Update of Acquisition of Hanworth Common Telephone Kiosk:  this was now the property of the Parish Council.  Power was still connected but no request had been made to the PC for payment of the electricity account.  Guidelines had been received from BT for future painting and glass replacement.  The memorial hall would be a better place for a defibrillator, should one be purchased.  The kiosk could be used for a second hand book exchange, possible with some shelving.  Maybe the builders currently employed at the Memorial Hall, might do something.  GW reminded the meeting that Hanworth Common is a conservation area.

(b) Risk Management Policy: to be agreed for dating.

GW asked whether the exterior painting was complete.  One top coat needed.  Tony Hadlow had had help from various people.  The fireplace

Was also nearly complete.  GW suggested a gathering of local people to open the Hall, once it was ready.  Tony Hadlow said £1,000 was available for such an event. 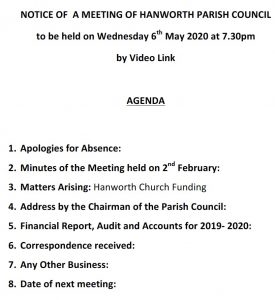 At the moment there is not the ability to invite members of the public into the video link. We hope in the future that this will be possible. Please bear with us in these difficult times.

If you have something you wish to bring to the council’s attention please use the contact page.

MINUTES OF A MEETING OF HANWORTH PARISH COUNCIL HELD ON WEDNESDAY 5th FEBRUARY 2020 in 29 The Common, Hanworth.

Cllr J Toye reported (i) a Town & Parish Forum had been set up by NNDC.  The next one was 23rd April at 10.30am.  The Forums are to provide a chance for Parish Councils to be heard. (ii) Environmental Forum on 26 March at 7.00 in NNDC office, would discuss sustainable transport. (ii) GW asked whether the `phone box could be retained as there was no mobile signal in the vicinity. Cllr J Toye to make enquiries.  (iv) Planning:  Cllr JT would ask the enforcement officer to inspect the site in Hanworth, where building was currently underway, and believed to be not in accordance with plans submitted.

Cllr John Timewell: (i) the council budget is currently being decided. (ii) JT confirmed that Hanworth and Thurgarton are both in the same ward. (iii) the proposed extension to the NDR had come under a lot of criticism, especially for the roundabouts.  JT had suggested that NCC should look at Milton Keynes roundabout.  Chevrons may help. (iv) JT confirmed he would be unable to attend meetings for a while but would be available by e mail or by phone.

We use cookies on our website to give you the most relevant experience by remembering your preferences and repeat visits. By clicking “Accept All”, you consent to the use of ALL the cookies. However, you may visit "Cookie Settings" to provide a controlled consent.
Cookie SettingsAccept All
Manage consent

This website uses cookies to improve your experience while you navigate through the website. Out of these, the cookies that are categorized as necessary are stored on your browser as they are essential for the working of basic functionalities of the website. We also use third-party cookies that help us analyze and understand how you use this website. These cookies will be stored in your browser only with your consent. You also have the option to opt-out of these cookies. But opting out of some of these cookies may affect your browsing experience.
Necessary Always Enabled
Necessary cookies are absolutely essential for the website to function properly. These cookies ensure basic functionalities and security features of the website, anonymously.
Functional
Functional cookies help to perform certain functionalities like sharing the content of the website on social media platforms, collect feedbacks, and other third-party features.
Performance
Performance cookies are used to understand and analyze the key performance indexes of the website which helps in delivering a better user experience for the visitors.
Analytics
Analytical cookies are used to understand how visitors interact with the website. These cookies help provide information on metrics the number of visitors, bounce rate, traffic source, etc.
Advertisement
Advertisement cookies are used to provide visitors with relevant ads and marketing campaigns. These cookies track visitors across websites and collect information to provide customized ads.
Others
Other uncategorized cookies are those that are being analyzed and have not been classified into a category as yet.
SAVE & ACCEPT
Powered by